The historic 110 year old Stanwood Odd Fellows Hall, now called the Floyd Norgaard Cultural Center was crowded with people last Saturday as members of nearby heritage organizations assembled for the Annual Malstrom Award Luncheon. This year the luncheon was combined with the workshops which made it a much more interesting and rich experience. 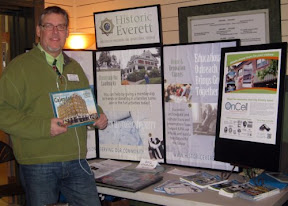 Heritage groups brought their books, dvds, calendars, cards, presentations and to share humorous and well as human history. Tables were filled with engaging displays of each organizations’ work. Workshops and meetings were held so we could introduce ourselves to each other, make family and community connections. We often find that we have varying versions of some of the same stories. Its part of the fun to hear the half truths and hearsay as we research and share our photos and findings. 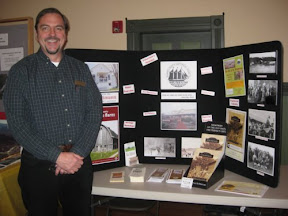 Also new this year were groups from our nearby counties, the Island County Historical Society, The Skagit Valley Genealogical Society 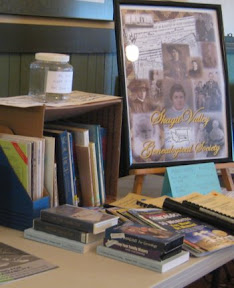 Each year volunteers of these local groups spend literally thousands of unpaid hours preserving history and historic places, writing, cataloging and researching all to bring some of the fascinating facts of our past to students and the general public. A representative cross section of the work each year is honored at the annual Malstrom Award Luncheon for the most significant project for that year.

This year the Malstrom Award had five projects nominated. The winner’s story is posted here [see previous post below]. There is much difficulty in deciding between them because of the varying nature of the projects. The nominated projects include remembrance events like the Vietnam War with the Monroe Historical Society’s “Vietnam Remembered: Veterans Stories” coordinated by Butch Ohlsen. There was also an excellent publication on the Catholic missionary, the Reverend Father Eugene Casimir Chirouse whose life journey took him from his home country of France to the newly developing Oregon Territory (what became eastern Washington), the Puget Sound region, Tulalip and finally British Columbia. Betty Lou Gaeng included much new information on this important little known figure of the territorial days in Washington. Chirouse is best remembered for his work among the Coast Salish of the Puget Sound region, particularly 21 years at the Tulalip Reservation. The publication can be found online at http://www.rootsweb.ancestry.com/~wasigs/chirouse.htm 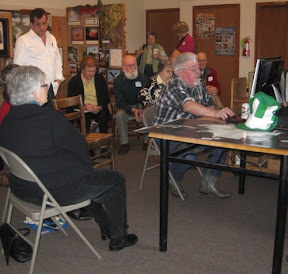 10,000 pages of Granite Falls newspapers (1922-1970s) were converted into text-searchable electronic files, making it possible to easily retrieve mentions of a particular family, business, or topic, whether in news articles, social columns, editorials, or advertisements. The project was done through a company named Small Town Newspapers and funded in part with two grants from the Snohomish County Heritage Preservation Commission, the remainder of the funds provided by Granite Falls Historical Society. With this model project we are one step closer to digitizing and making accessible the history of this community. The original copies of the newspapers were scanned rather than the microfilm so the quality of the images is very good. Hours of volunteer time went into clarifying copyright and permissions for this and still more are needed for improving keyword and name access to these papers. But a large amount of the work is done.

Another type of nomination is often for exhibits such as those at Heritage Park Museum by the Alderwood Manor Heritage Association. The group recreated rooms in the upper floor of the Wickers building, where the Wicker’s family once lived upstairs of their Alderwood Mercantile (Wickers Store.) There are stories of the Wickers Building and other buildings in Heritage Park, Lynnwood which was near an area that was originally called Alderwood Manor. Alderwood Manor was a unique planned community built by the Puget Mill Company after they logged off more than 6,000 acres prior to the 1920s.

Many of our Heritage Day discussions focused on how to bring our history to our communities, schools and our cell phones more efficiently. We find interest in history is very high but we are almost all totally volunteer operated so we always need new volunteers who have computer skills, like to research, have a passion for preserving old buildings and places or like to do fund raising projects for good causes. We all welcome new volunteers so if you have an interest, contact the group closest to you and volunteer! (see the side bar on the right for a group that interests you!)

Here’s a short slide show but this time the photos are just a small portion of the thousand words!

This entry was posted in History Programs & Events, Malstrom Awards. Bookmark the permalink.